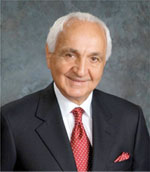 To appreciate the culture and success of AVI, one must truly come to know and understand our visionary founder, John Payiavlas. John’s mindset from the very beginning focused on what he considered “life’s reward system.” Integrity. Putting others first. Exceeding expectations. Excellence. Today, these tenets and ideals are found in the culture of our company.

A son of immigrants, John grew up in a working-class family with hopes of realizing the American dream. His successful journey in food service began when he and two friends opened and operated a local diner, the Village Café, in their small hometown of Warren, Ohio. It was there, a frequent customer presented John an opportunity to purchase a very small vending company known as Automatic Vendors. His decision to seize the opportunity would later result in America’s largest family owned and operated food service company.

From the beginning, he was determined to make his business a success. Insisting on absolutely no shortcuts, he differentiated himself from the competition by providing homemade “from scratch” fresh foods for the refrigerated vending machines he serviced. He worked around the clock responding to the needs and requests of each customer, often before they were even asked.

The birth of his two children, Patrice (Patsy) and Anthony, coincided with the start of his new business venture. John worked passionately, nurturing his family and new business. He involved his children from the beginning, instilling the family values and work ethic they continue to uphold.

AVI truly became a family business… and the business became a part of the family. Patsy and Anthony learned the business from the ground up by preparing sandwiches, sweeping floors and assisting their father in the office. Those experiences were an education in the AVI way. They were taught that success is a result of treating people the right way.

As the children grew, so did the business. In the mid-1980s, AVI added enhanced business dining and catering services and entered new geographic markets as its reputation continued to grow. Soon, AVI began services at colleges and universities, healthcare facilities and sports/leisure complexes. We now serve some of the most widely known and recognized businesses, universities, healthcare and leisure facilities in the world.

Today, AVI has become the largest independently owned and operated food service company in America. Family values, a strong work ethic and dedication to customer needs continue to permeate through thousands of team members in every facet of the business. As Chairman, John is actively involved while his children lead the organization with the same enthusiasm, commitment and vision.

Integrity.
We honor truth, fairness, and honesty above all else and treat integrity as a constant and absolute.
Excellence.
We are committed to excellence in all we do, in our professional lives as well as in our personal lives. We treat excellence as a way of life in the delivery of our product, our service and our relationships.
Innovation.
We reach outward into the unknown to identify new and better ways of doing things and bringing products and services to market in ways others only dream of.
Relationships.
We seek to strengthen the bonds that exist between each of us, built upon faith, trust, esteem and respect. Our goal is to build meaningful relationships with all those whose lives we touch…our customers, guests, team members, vendors and business partners.
Sensitivity Toward People.
We serve our own cause best by placing the interests of others first. And we dedicate ourselves to providing an atmosphere and environment where every person is able to reach his or her maximum potential and contribution. We respect every person and value the uniqueness of each individual.
Sensitivity Toward Society.
We are world citizens and because of this we endeavor to create meaningful relationships with the communities and institutions we are a part of, our nation and our world.
Customer & Guest Focus.
We treat every guest and customer as the most important guest and customer in all the world.
Family.
As a family-owned and operated business, we especially value the relationship that every team member has with his or her family and we seek to preserve, cultivate and nurture this bond.
Passion.
All we do, we do with fervor, delight, excitement and enthusiasm.
Accountability.
With each business relationship, a plan is established for the mutual benefit of our customer and ourselves. We are accountable to meet or exceed the plan and deliver positive results for both parties, day to day, on an ongoing basis.